When you want to handle events when pressing keys in the keyboard, you can handle the KeyPress, KeyDown, and KeyUp events. The KeyDown event occurs when a keyboard key is pressed down and the KeyUp event occurs after you release the pressed key. The KeyPress event triggers when a complete keypress is made(pressing then releasing the key). The following example adds a KeyPressevent to the form and whenever a key is pressed in the keyboard, it is added to the text of a label. Create a new Windows Forms Application and name it KeyBoardEvents then add a Label control. 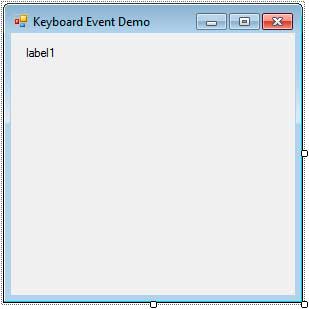 The KeyPress event will trigger whenever a button in your keyboard is pressed. Line 9 declares and initialize a counter variable named charCount that will be used to detect the number of characters of the current line This will be used for our simple word wrapping mechanism. The event handler monitors the number of characters typed by incrementing the charCount at Line 18. The condition at Line 21 tests whether the value of charCount doesn’t exceed 30. If so, it goes to the next line by adding the “\r\n” (carriage return-line feed) which is Windows’ way of proceeding to the next line. We then reset the charCount to 0 (Line 24) since we reached the beginning of the next line. If the charCount is still below or equal to 30, then we simply append the character typed by the user by using the KeyPressEventArgs.KeyChar property. When you execute the program, you can type letters using your keyboard and watch as the text inside the label is updated and the key you have just entered was appended to its text.

When you handle the KeyDown and KeyUp events, you get a different event argument named KeyEventArgs and it contains more properties about the pressed key. It contains the following properties.

As an example, the following code snippet uses the SupressKeyPress property of the KeyEventArgs to only allow numeric input and disallow any other characters such as alphabet or symbols. Add a text box to your form and add an event handler to its KeyDown event.

The condition inside the if statement says that if the key typed by the user is not a number key, or if the shift key is pressed, then it will be ignored by setting the SuppressKeyPress property. We used the KeyCode property in the condition which contains values from the Keys enumeration. The numeric keys are represented by values D0 to D9. The need to check if the Shift key is not pressed is needed since pressing Shift key and a numeric key will actually result in a symbol associated to the number key (@ to 2 for example). Therefore, we used the Shift property of the KeyEventArgs class.

Related Posts
ListBox Control
The ListBox control is used to show a list of strings which you can select. By default,…
Adding Menus to Your Form
Menu bars can be seen in almost every application out there. Menus are used to…
Windows Form
Windows Forms (or simply forms) are the windows you see in a Windows Application. You can create…